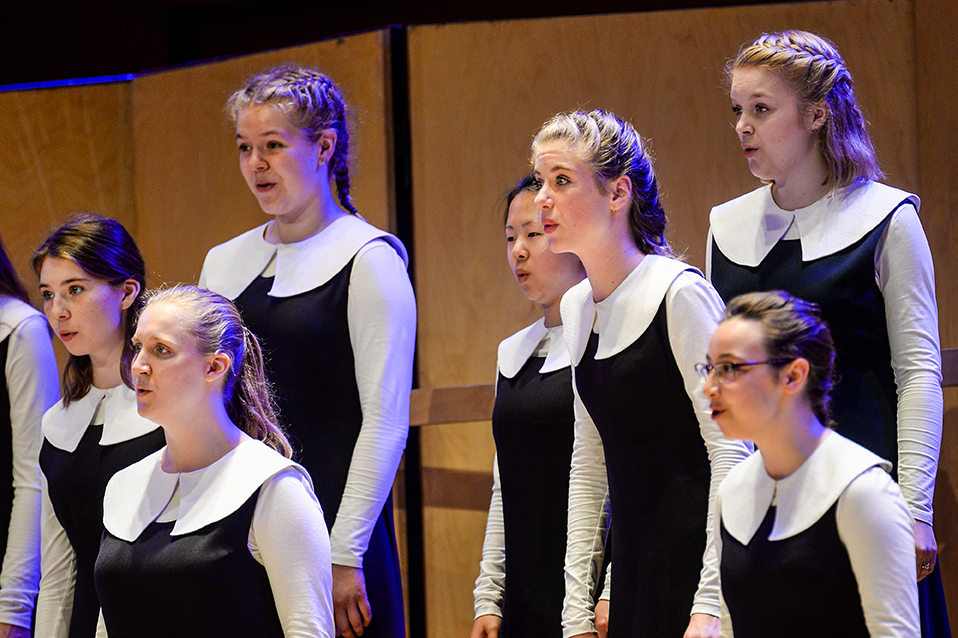 The conductor and college professor György Gulyás is a prominent figure of the Hungarian musical culture of the 20 th century. He graduated as a teacher and cantor at the Reformed College of Debrecen in 1936 then he studied composition, secondary school music teaching at the Ferenc Liszt Royal Academy of Music. He was mostly influenced by Lajos Bárdos , Jenő Ádám, Zoltán Kodály from among his masters. He got acquainted with the most outstanding intellectuals of his age for example Lőrinc Szabó, Gyula Illyés , Péter Veres, László Németh.

While he studied he also taught in his homeland, in Békés County, later he was a teacher of music and choirmaster in the Dóczy Reformed Teachers’ Training School in Debrecen. In 1948 he established a multilevel educational institution of artistic studies in Békéstarhos called “Singing School” primarily to foster national culture. It has achieved a lot since its establishment helping manyyoung talents to start a career in music. Following his work in Békéstarhos György Gulyás was appointed director of the Secondary Music School in Debrecen. This institution was the first to get permit from Zoltán Kodály to bear his name in 1957. The girls’ choir of the school won 1 st prize of the international choir competition of Llangollen in 1958. Transformed into a mixed choir it made a huge success again in Arezzo next year launching the success story of the Debrecen Kodály Chorus still in existence.

In order to make Hungarian and foreign contemporary choir music widely known György Gulyás initiated the establishment of the Béla Bartók International Choir Competition first to take place in 1961 organised by the city of Debrecen. Between 1966 and 1975 he was founder and director of the Training Department of the Ferenc Liszt Academy of Music. In the mean time, he reorganised the Kodály Chorus as a professional choir in 1971 with which he gained successes all over the world. His extremely wide repertoire ranged from Kodály, Bartók and other contemporary Hungarian composers to Palestrina and Penderecki. He conducted numerous world and Hungarian premiers.

He often appeared as guest conductor or performer and participated in many juries (Llangollen, Tours, Arezzo, Montreux, Athens etc. ) . He had to resign from the directorship of the Debrecen Kodály Chorus in the summer of 1983. After that, he devoted most of his time to write his memoirs while he was honorary president of the Béla Bartók International Choir Competition. He died in the autumn of 1993, his death being a great loss both for the Hungarian and European musical culture since he was not only a particularly sensitive musician but also a great organiser.